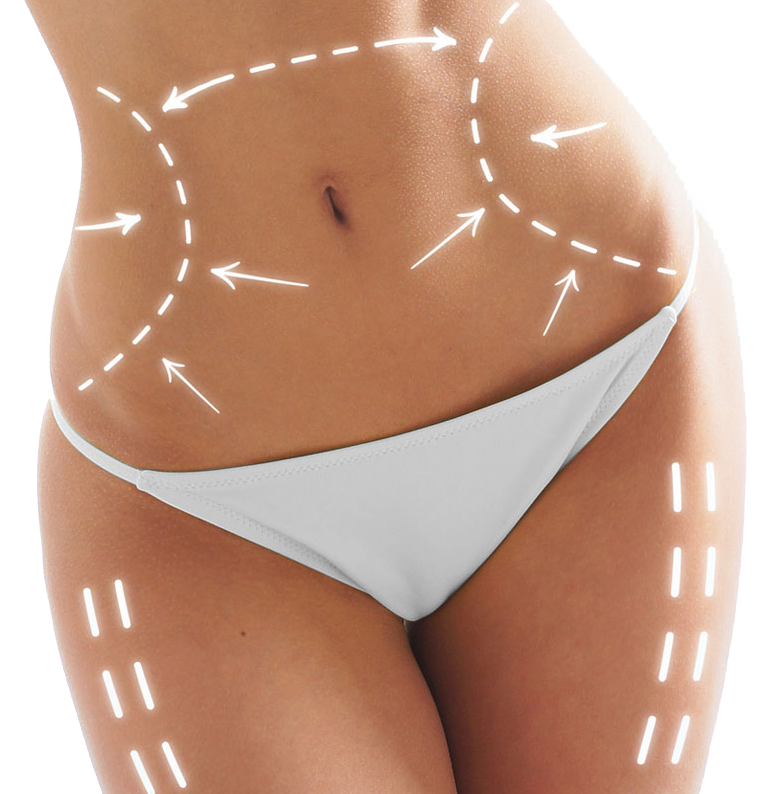 Liposuction is a surgical operation that has existed for decades. The techniques have evolved and improved over the years.

This technique is based on the extraction of localised excess body fat deposits via small incisions that are not noticeable afterwards.

Liposuction is not a substitute for losing weight but rather it is a method to remove accumulated fat which cannot be eradicated by either diet or exercise.

Between 30 minutes and several hours

Depending on the area to be treated, the procedure can be performed either as an outpatient or can mean staying in hospital for 2 or 3 days.

Recovery is fairly mild and allows for rapid reincorporation back to normal daily activities.

A small incision is made, large enough to introduce a hollow tube called a liposuction cannula with which the fat is drawn out. During the liposuction, liquid is lost along with the fat, therefore requiring the administration of fluids via an intravenous drip.

After surgery a corset, hosiery or elastic bandage are fitted on the treated area in order to keep the swelling and bleeding under control, as well as to help the skin adapt to its new girth. It’s normally necessary to wear it for between 2 and 3 weeks. Antibiotics can also be administered to prevent infections. Don’t expect it to look perfect immediately after surgery; moreover, you will feel heavier than usual due to an excess of fluid that has been administered. The areas that have been liposuctioned will be swollen and present bruising, and you may have a burning sensation. Pain relief is obtained with the prescribed medication. You may feel a loss of sensation in the area that has been treated; don’t worry it will come back.

Healing is a gradual process. It’s recommendable to start walking as soon as possible (in order to prevent the formation of venous thrombus in the legs), but don’t carry out heavy tasks for between 2 to 4 weeks. The stitches will be removed after 5 to 10 days, and you can return to work within 2 or 3 days, or at the very most 2 weeks after the operation, depending on the extent of the liposuction. Within the first or second month following the operation the swelling and bruising will disappear; however, a small amount of swelling may remain for 6 months or more.

Finance from:
62€ per month
All included

This website uses cookies so that we can provide you with the best user experience possible. Cookie information is stored in your browser and performs functions such as recognising you when you return to our website and helping our team to understand which sections of the website you find most interesting and useful.

Strictly Necessary Cookie should be enabled at all times so that we can save your preferences for cookie settings.

If you disable this cookie, we will not be able to save your preferences. This means that every time you visit this website you will need to enable or disable cookies again.

This website uses Google Analytics to collect anonymous information such as the number of visitors to the site, and the most popular pages.

Please enable Strictly Necessary Cookies first so that we can save your preferences!